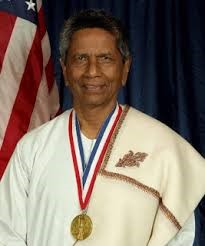 Chaudhuri graduated as a physician from the University of Rangoon in 1961, and subsequently trained as a paediatrician, specialising in child nutrition at the All India Institute of Medical Sciences, New Delhi in 1970

After witnessing the devastating effects of malnutrition and stunting on India’s children and society Dr. Chaudhuri Founded the Child In Need Institute (CINI).

He has served as a consultant, researcher and advisor to various national and international agencies in India and other countries of Asia and Africa. His work has been recognised by a number of awards, including the ABP’s Sera Bangali Award (Kolkata, 2013), the Ellis Island Medal of Honor, Global Humanitarian Award (Ellis Island, New York, 2008), the World of Children Awards, UNICEF (New York, 2007), the Italian Parliament Commission for Infants Award (Rome, 2005), the Ross Award, Institute of Post Graduate Medical Education & Research (Calcutta, 1995), the Catherine Freyman Prize in Social Pediatrics, AIIMS (New Delhi, 1970).